Notice: Function add_theme_support( 'html5' ) was called incorrectly. You need to pass an array of types. Please see Debugging in WordPress for more information. (This message was added in version 3.6.1.) in /var/www/wp-includes/functions.php on line 5831
 KALAM POLO کلم پلو 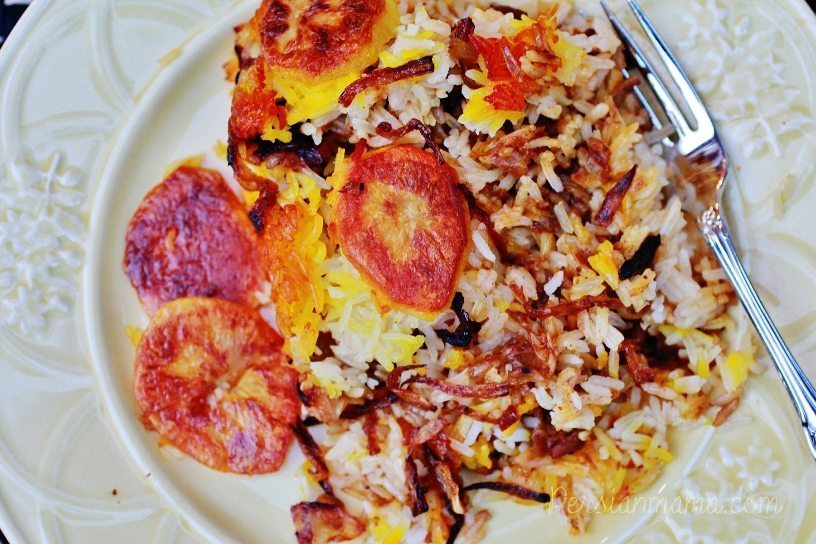 Kalam polo is a type of delicious mixed Persian rice. Kalam means cabbage and polo is rice in Farsi. Like most recipes this one also has many different versions and all are delicious. Different techniques are used in preparing this rice but the basic ingredients, cabbage, meat, and rice are used in all versions, except for the vegetarian version (included in the recipe notes). 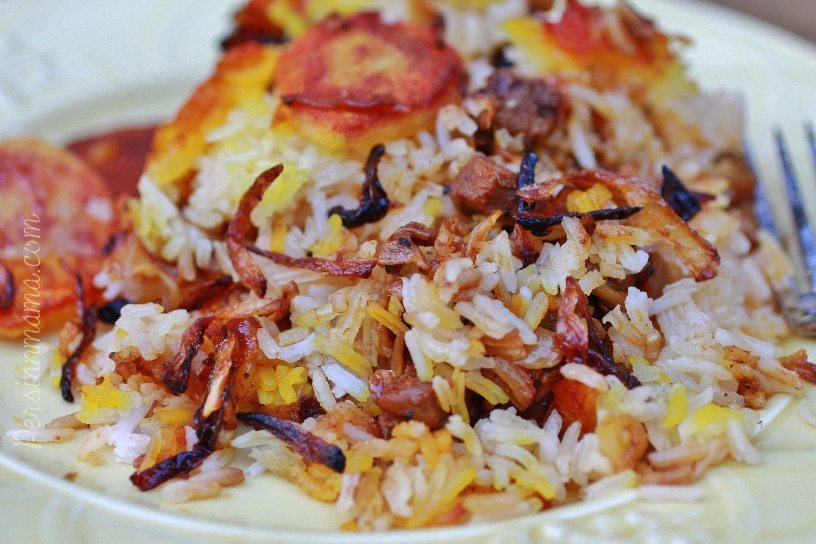 The meat used in different recipes varies from small bite size cubed meat to small meatballs, as well as ground meat. Preparing Kalam Polo with ground meat involves the least amount of work and the recipe using meatballs is the most time intensive.  I have used small cubed cross rib roast beef that cooks tender and delicious in a very short time and the small bites are perfect for this mixed rice. 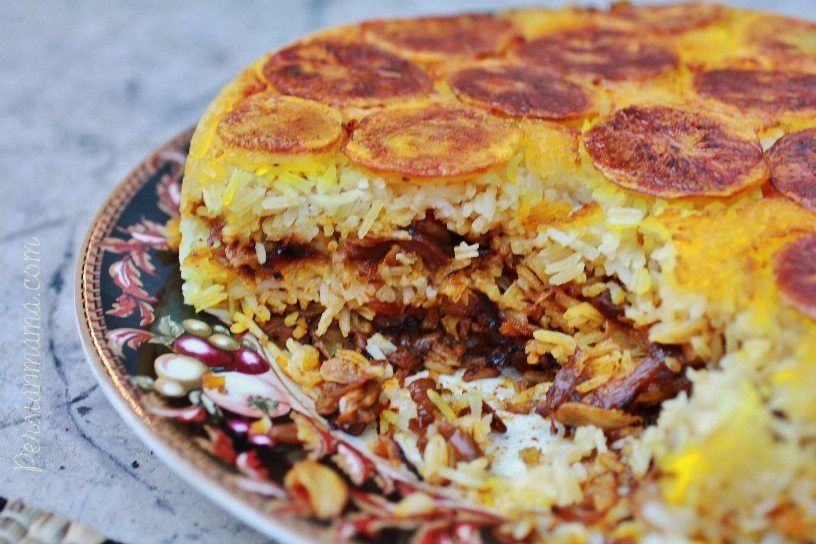 The cubed beef is cooked with spices in a tomato sauce, then mixed with cabbage that is browned in butter.  This delicious combination is then steamed with layers of aromatic basmati rice sprinkled with Persian Rice Spice. This spice blend is made up of crushed rose petals mixed with ground cinnamon, cardamom, cumin and nutmeg. Dried rose petals are sold in Middle Eastern, Persian and some Asian markets; however if you are unable to find this spice, leaving it out will not drastically alter the flavor of this delicious spice blend. I have posted the recipe for the Rice Spice here. 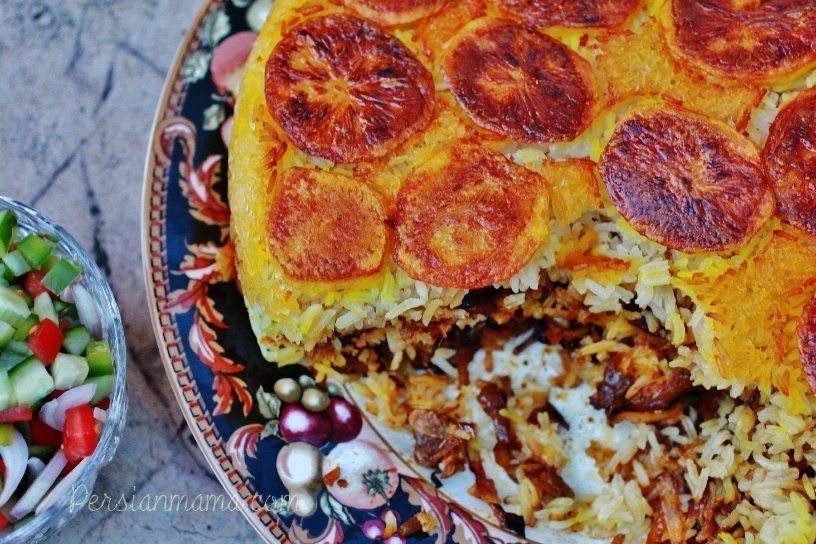 Besides the beef, that I have used in my Kalam Polo, lamb, turkey or chicken could be used in this recipe. However if you opt to choose poultry, I would recommend using ground turkey or small pieces of chicken breast. The reason is that I have always found the ground chicken to be somewhat bland compared to ground turkey, but that is also a personal preference. 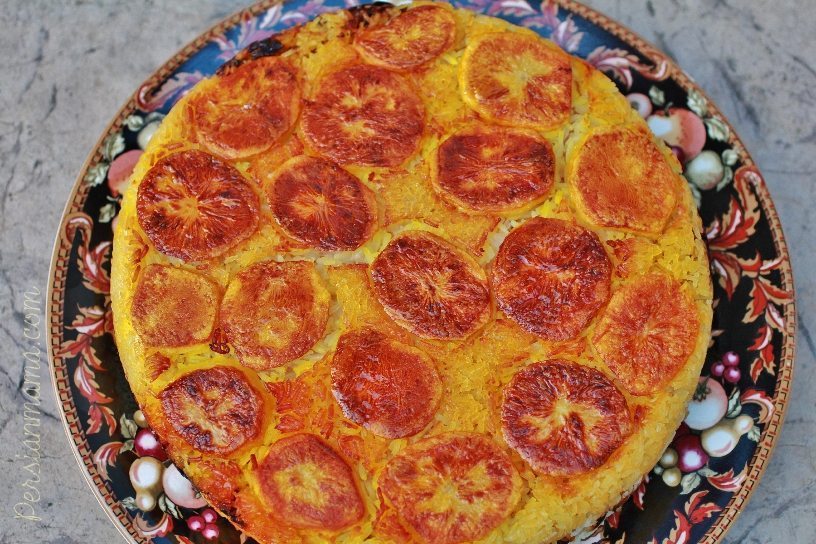 Last but not least is the choice of TahDig (or bottom of the pot) for this flavorful rice dish. Persians and non-Persians love TahDig, which is the layer in the bottom of the rice that turns crunchy and golden while the rice is steamed. In the case of all the inverted rice dishes like this one, the rice is served with the TahDig side up.  TahDig layer could be pieces of thin flat bread lavash or flour tortilla.  A mixture of rice with yogurt and saffron is another option. You will find the instructions for both of these TahDig(s) HERE.   The possibilities don’t end there; for example in this recipe I have layered the bottom of the rice with sliced potatoes tossed with a pinch of saffron, and as you can see the TahDig turned out awesome! 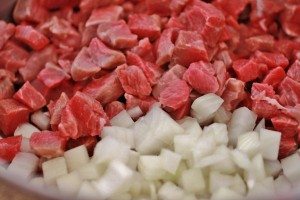 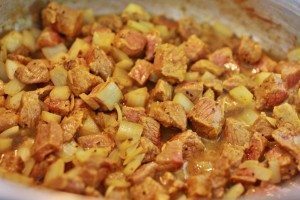 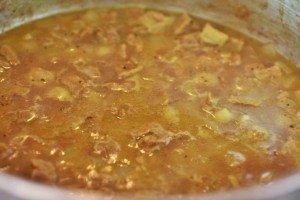 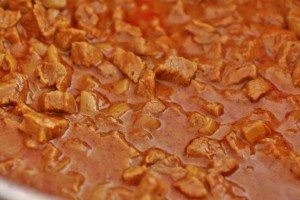 Water is added to the meat. The meat is cooked for a while, then tomato paste is added and it is simmered for a bit longer until the meat is tender and sauce has thickened. 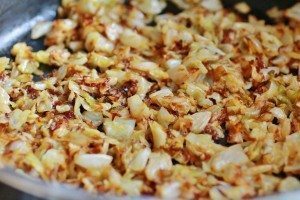 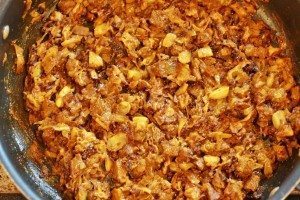 While the meat is cooking, brown the cabbage and mix it with the fried onions. Sprinkle 1/2 teaspoon of ground cinnamon and a pinch of cayenne pepper (optional) over the cabbage and onion mix and add the meat sauce to the pot and toss to mix. Set aside. 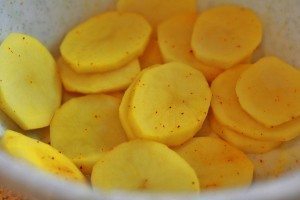 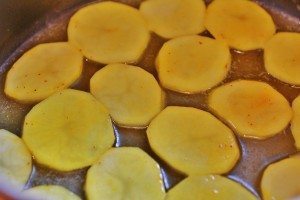 To prepare the TahDig sliced potatoes are tossed with a pinch of saffron (that is all it takes, but it is totally optional). The oil and butter are heated in a nonstick 5-Qt stockpot then the potatoes are arranged in the bottom of the pot with as little space between the slices are possible. 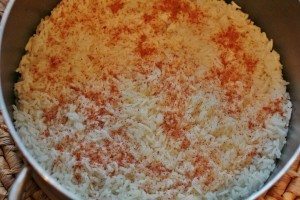 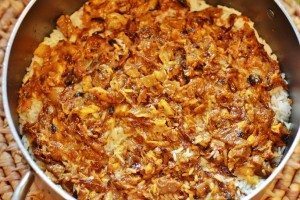 Partially cook the rice following these instructions up to the point where the par cooked rice is rinsed under cold water and drained.
Use a spatula to evenly layer half of the rice, then half of the meat and cabbage mixture. Repeat one more time with the rest of rice and meat. The top layer will be the meat mixture. 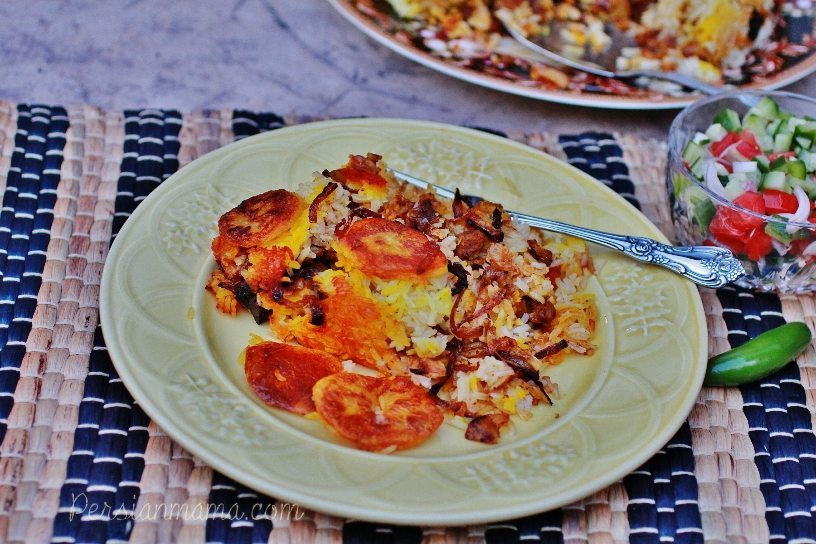 Print
Preparation Time: About 1 hour 30 minutes
Cooking time: 1 hour 15 minutes
Serves 4-5
Author: Homa
Recipe type: Main Dish
Cuisine: Persian
Ingredients
Instructions
Notes
The vegetarian method – Similar to most Persian recipes, Kalam Polo could easily be suitable for a vegetarian diet by leaving out the meat. Increase the cabbage (kalam) by half a pound (total of 1 ¾ pounds), fry the cubed cabbage and set it aside. In the same skillet fry a large thinly sliced onion with ½ teaspoon turmeric. Increase the tomato paste to 2 tablespoons and saute for 2-3 minutes with the fried onions. Add ½ cup of water, ½ teaspoon salt and ½ teaspoon ground black pepper to the skillet and bring it to a boil. Adjust the salt and pepper to taste. Add the fried cabbage to the skillet, stir to mix. Reduce the heat to medium, cover the skillet and cook for 10 minutes. Follow the rest of the recipe substituting the cabbage mixture for the meat mixture.
3.4.3174