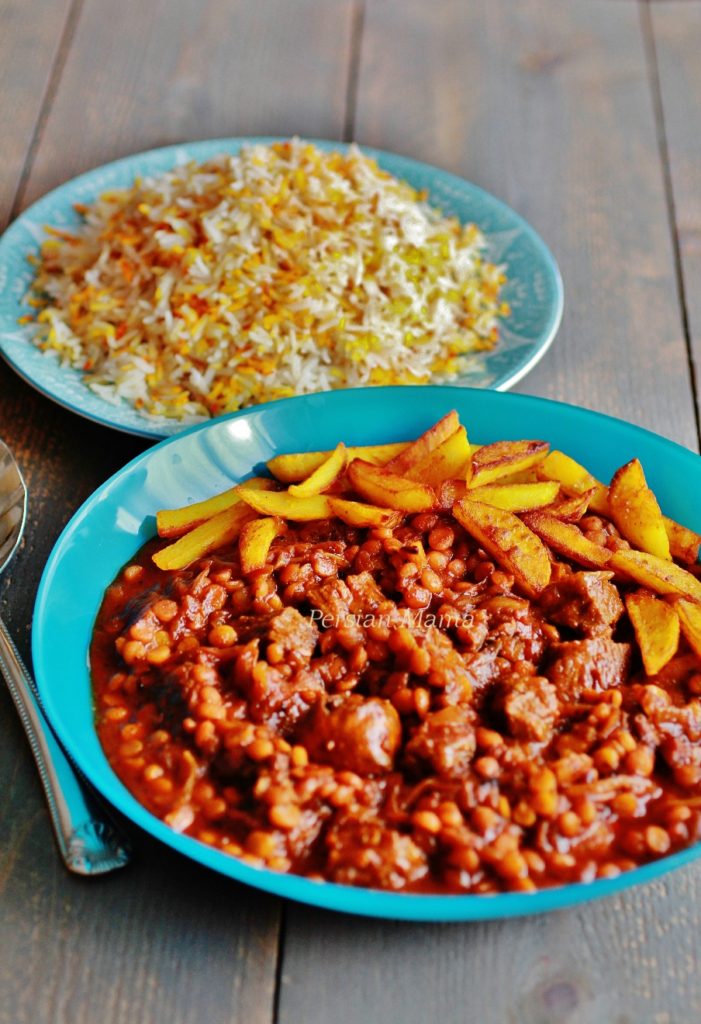 Khoresh Gheymeh (gheimeh), also called Gheymeh Polo (polo means rice) is a Beef and Split Pea Stew which is a very traditional and popular Iranian stew with saffron potatoes that is served over either white rice or Aromatic Rice. The Aromatic Rice is a version of steamed white rice where Persian Rice Spice blend is sprinkled on the rice before steaming it. 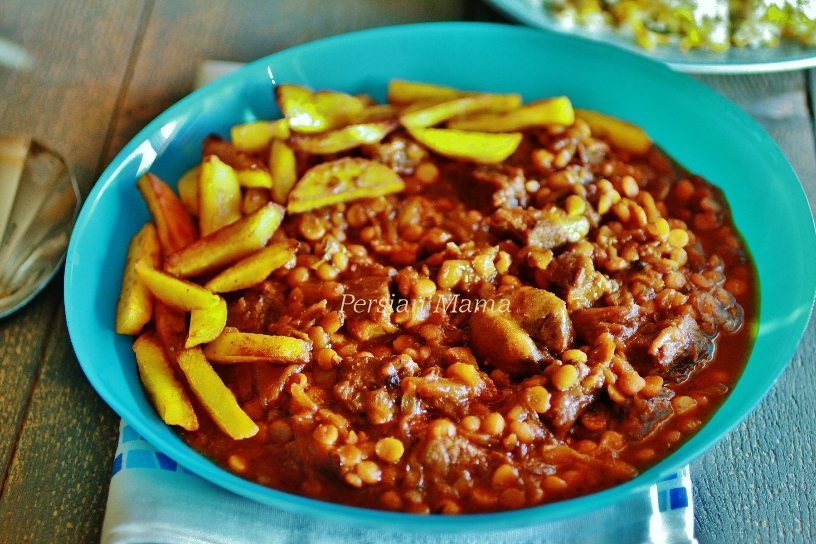 The word gheymeh comes from how the meat is cut into small cubes in this recipe and unlike other Persian khoreshs that have larger chunks of meat, Gheymeh meat is usually cut into about one inch cubes. Traditionally Gheymeh is made with lamb or beef but due to the recent interest in using white meat instead of the red meat some people may choose to use cubed chicken breast instead which involves a slightly different preparation than the lamb or beef. 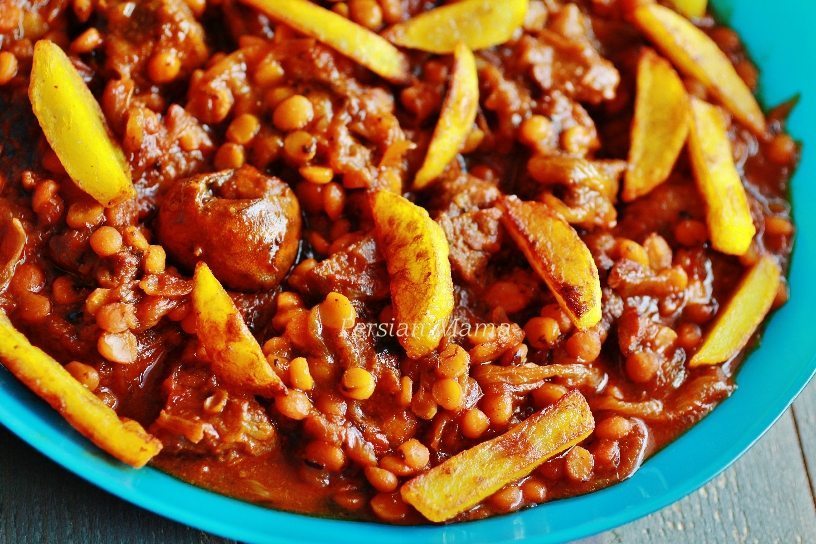 The yellow split peas used in this recipe are called “dir paz,” which literally means long cooking. This kind of split peas look exactly the same as the regular split peas but are tastier and hold their shape better during the cooking process and do not fall apart. This variety is usually sold in the Middle Eastern markets and you can ask for it by name “lapeh dir paz;” lapeh means split pea.  This is the only kind of yellow split peas that I use in all of my recipes. 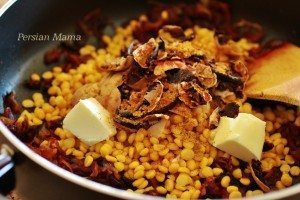 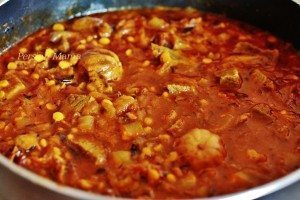 The half cooked split peas, fried onions, tomato paste, Limoo Amani, meat spice and butter are sauteed for a few minutes before adding the cooked meat and broth. Next the pot is covered and cooked over medium low heat until all the ingredient are cooked and tender.

UPDATE:  I have recently added a Meat Spice Blend II which adds some warm spices to this khoresh; both blends taste wonderful in this recipe and it is a matter of personal preference which one you decide to use. 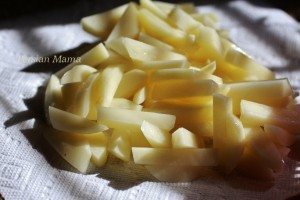 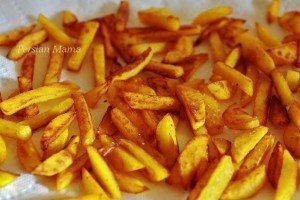 The potatoes are peeled and cut into thin wedges then rinsed under cold water to get rid of the starch so the wedges do not stick together during frying. Next, the potato wedges are pat dried with a paper towel and tossed with the optional saffron before frying in heated oil. Once the potato wedges are golden brown they are transferred to a paper towel lined platter to get rid of the excess oil. A light sprinkle of kosher salt adds flavor to the fried saffron potatoes. 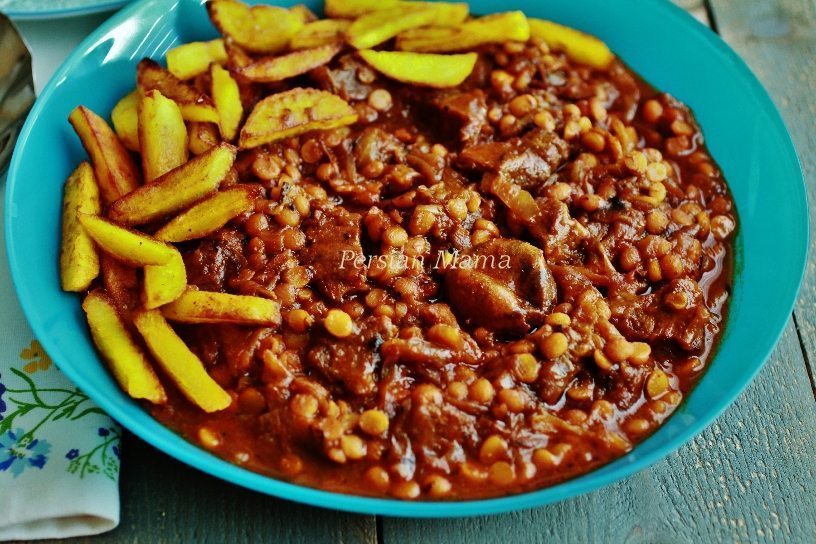 Limoo Amani (Persian dried lime) plays a big role in the amazing taste of Gheymeh and it is also sold in the Middle Eastern markets. However if you are unable to find it in your area you can substitute fresh lime juice for it and the Khoresh Gheymeh will still be wonderful. 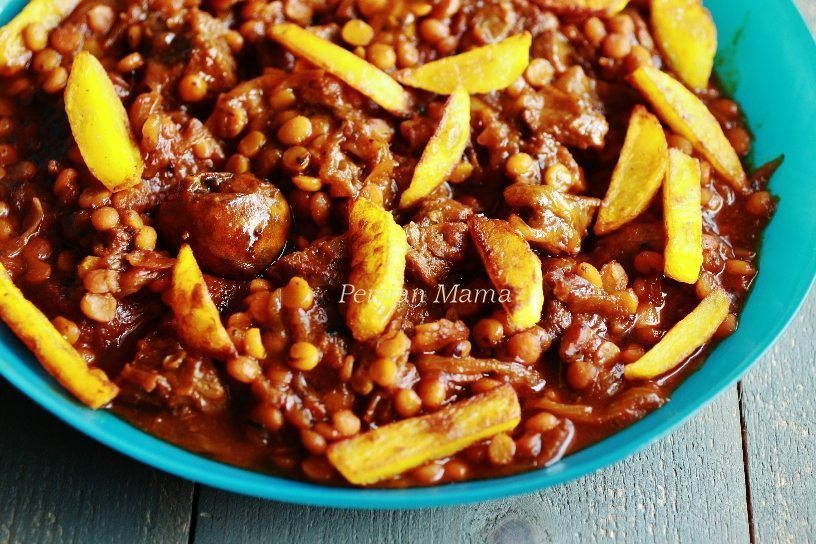 The traditional presentation of Khoresh Gheymeh is like the above picture with fried saffron potato wedges on top.   Enjoy this mouthwatering khoresh over Aromatic Rice or White Rice. 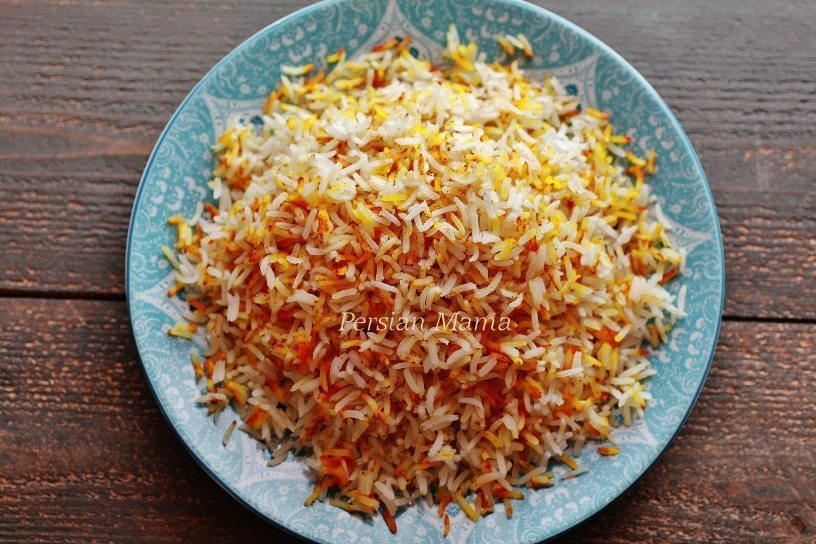 This is the Aromatic Rice that is steamed with Persian Rice Spice and a sprinkle of saffron.

Print
Author: Homa
Recipe type: Khoresh/Stew on Rice
Cuisine: Persian
Serves: 5-6
Ingredients
Instructions
Notes
Yellow Split Peas: If you have to use the regular yellow split peas which is sold in neighborhood supermarkets boil it in water for 2-3 minutes, discard the water and run the split peas under cold water to stop them from cooking further. Then add the peas to Gheymeh in the last 20 minutes of cooking to prevent them from over cooking.
Persian Rice Spice: The Persian Rice Spice is a blend of 5 ground spices: Rose petals, cinnamon, cumin, nutmeg and cardamom. The proportions are different depending on who is making the spice blend. I make mine in the order that it is written, with 3 parts rose petals, 2 cinnamon, 1 cumin and ½ each of nutmeg and cardamom.
Limoo Amani: If you have to substitute fresh lime juice instead of the dried lime, use ¼-1/3 cup of lime juice, adjust to your taste.
3.5.3251
« TURKEY AND HERB KABOBS
GREEK YOGURT DIP »