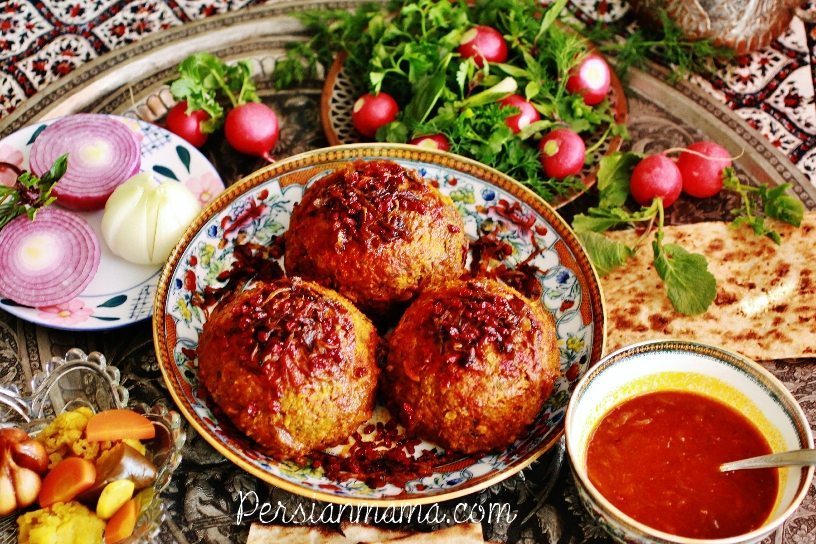 Koofteh (Kufteh) Tabrizi is very famous in Iran, it originates in Tabriz (my hometown). Tabrizis are known to make the best Koofteh Tabrizi, because after all when a food is named after your city, it has to be worth that honor! I have had many koofteh Tabrzis in my life and have made quite a few myself, and I dare say this is the best!  Cooking Koofteh takes some work and I am very grateful to my talented niece who has given me this recipe and has been there to answer the questions that I had when I made her very special Koofteh Tabrizi for the first time.  What you will learn from this lengthy tutorial is that it is not just the ingredients but the technique that makes this Koofteh one of a kind.   The taste is divine and the texture is incredibly light and moist. 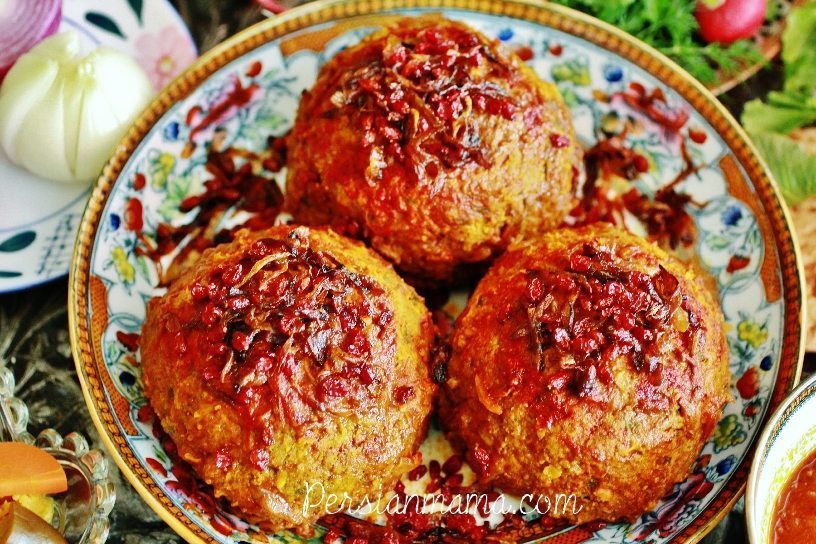 Ever since I posted a picture of this Koofteh Tabrizi to Instagram and Facebook a few weeks ago I have received many requests for this recipe.  So I think with Nowruz (Persian New Year) around the corner this will be my early “Eydi” (Nowruz gift) to say Thank You to all my lovely readers who appreciate my work and enjoy my recipes.  This is not a quick and effortless recipe but you and all the lucky people whom you cook for will love it, and that is a promise!

Koofteh Tabrizi is a super meatball stuffed with dried fruits and berries, also a variety of nuts.  There are some other interesting fillings for this very traditional Azeri dish that are worth mentioning. One very common item is a peeled hard boiled egg that is placed inside the koofteh along with nuts and dried fruit. The yellow cooked yolk surrounded by a ring of white makes a pretty presentation when you cut into the koofteh, so you might give this a try if you like. I personally prefer not to, simply because I think it takes up the space that I can fill with my favorite dried fruits and nuts that are more flavorful. 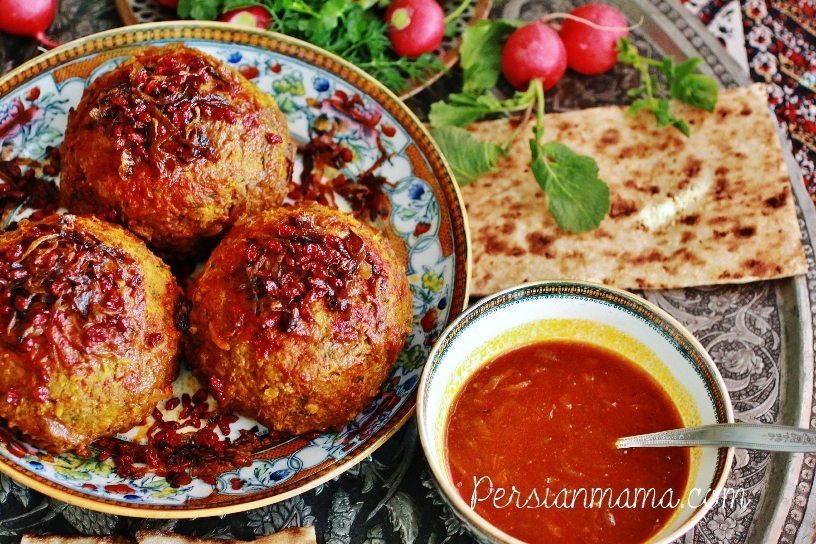 The other two choices for stuffing are almost unbelievable. I have never had either one of them myself, but I figure I should share these fun facts with you.  Some cooks stuff one whole cooked chicken inside a koofteh.  An even larger stuffing is a whole turkey! The latter koofteh can weigh up to 60 plus pounds.  Keep in mind that each koofteh in my recipe weighs about one pound.

The delicious broth that you see in the picture is mixed with pieces of Sangak or other flat bread and then it is called “Tilit.”  The koofteh has to cook in very little sauce otherwise it will fall apart.  When the koofteh is ready the sauce is reduced to only about a cup or so.  To make enough broth for the Tilit, a thin sauce is made separately and the reduced (thickened) sauce is added to it to create an amazing soup.  When the pieces of bread soak up all of this broth, you will have what is called “Tilit,” with a melt in the mouth texture and an outstanding flavor. 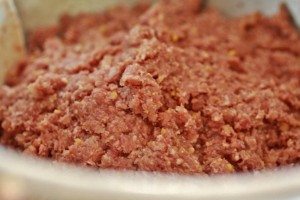 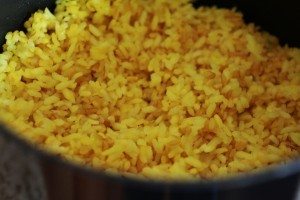 Day 1:  Ground beef, pieces of onion and cooked split peas are processed by a meat grinder attachment or a food processor until uniform and paste like. The rice and bulgur are cooked in water with some salt, turmeric and butter until most of the liquid is cooked off and the grains are tender but firm inside. In a large bowl the meat mixture, cooked rice mixture, eggs and spices are mixed until blended. Cover the bowl and refrigerate overnight. 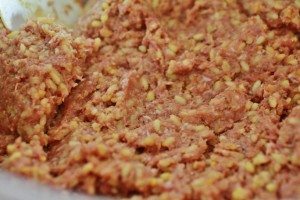 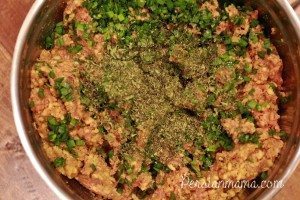 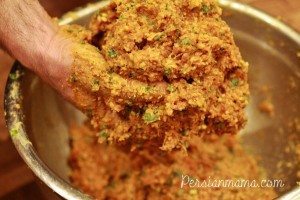 DAY 2:  Peel and slice 2 large yellow onions.  Fry the onions in butter until golden brown.  You will be dividing these fried onions and use them in the sauces (for cooking the koofteh and for the Tilit sauce), for filling, and for the garnish.   Prepare the sauce (according to the recipe) in a large 12-inch stockpot or divide the recipe and make it in two 10-inch stockpots. Bring it to a slow boil, then turn off the heat and set it aside until all the Koofteh(s) are stuffed.

Add herbs and salt to the refrigerated ingredients. Knead the Koofteh mixture with your hands several times to blend well. Then comes the part that name Koofteh (to be beaten) comes from:   Pick up handfuls of the ingredients,  raise it above the level of the bowl and throw it back in the bowl (as you can see I had a pair of helping hands for this part!)  Repeat this with the rest of the batter. This picking and throwing down will be done several times until you have a smooth paste that easily sticks together and will not fall apart when you pick it up in your hand. 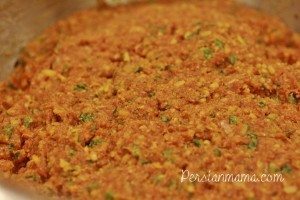 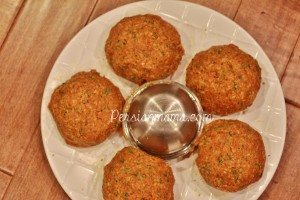 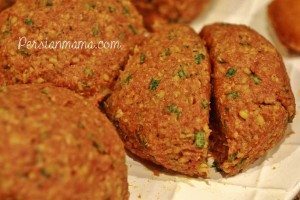 Use a 10-ounce bowl to divide the paste into 6 equal meatballs. Divide one of the meatballs in two 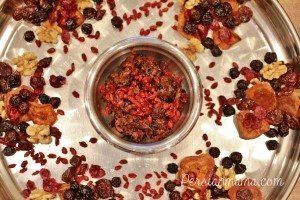 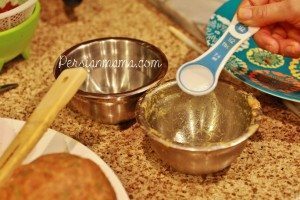 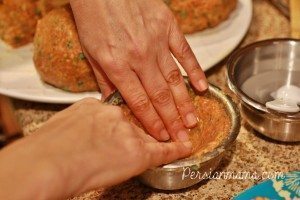 Have the fillings ready for 6 koofteh. Have a small bowl of water near your work station.  Add 1/2 tablespoon water to the same 10-ounce bowl that you have used for making the meatballs. Add one half of the meatball in the bowl and use your fingers to spread it in the bottom and all the way up the sides of the bowl. 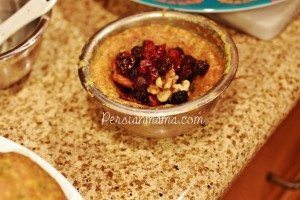 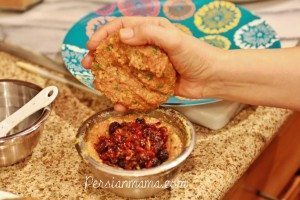 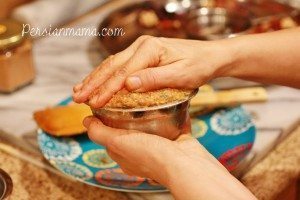 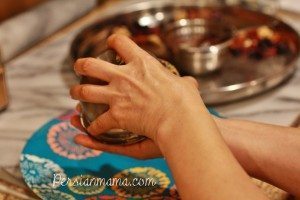 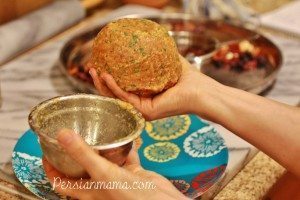 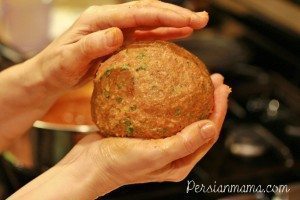 Invert the bowl and tap it a few times on the palm of your hand to release the meatball. Pass the meatball from hand to hand 5-6 times until there is no visible seam. Repeat this with all of the meat balls. Bring the prepared sauce to a low boil over medium low heat, or a little higher to maintain a low boil. 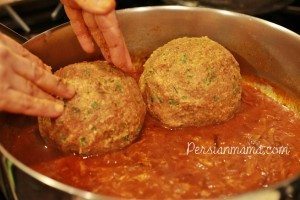 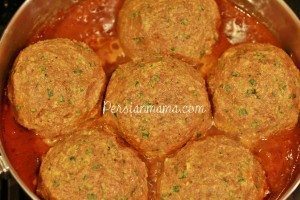 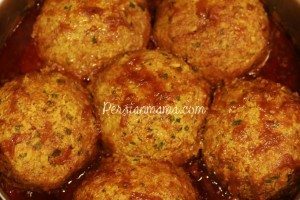 Gently slip the stuffed Koofteh one by one into the sauce that is gently boiling. Do Not move or turn the koofteh at any point after you put them in the sauce. The sauce should be boiling gently so the koofteh starts cooking and setting, as soon as it is placed in the sauce. Add the rest of the koofteh(s), there will be almost no space between them and it is okay. While maintaining a low boil cook the koofteh without covering it for 30 minutes. By the end of this time the koofteh will start changing color and the top will feel firmer to touch. Baste the tops with some of the broth, lower the heat to low and cover the pot. Simmer for the koofteh for 1 hour and 30 minutes. Baste the tops a few times during this cooking time.  At the end of this time the sauce will have a clear layer of oil rising to the top. This is called “be roghan oftadan” or “ja oftadan,” and it means your long awaited Koofteh Tabrizi is cooked. Turn off the heat and let koofteh sit in the pot for about 15 minutes. Most of the liquid in the pot will be absorbed by the koofteh(s) and there will be some thick sauce left in the bottom of the pot. You will be removing all the koofteh plus the thick sauce out of the pot.  Next, a thin sauce is made and mixed with half or all of the thick sauce, depending on how many koofteh(s) you decide to serve .  You have the option to either serve all 6 Koofteh or serve 3 and freeze the rest.
*For the rest of serving and/or freezing instructions I will refer you to the recipe section. 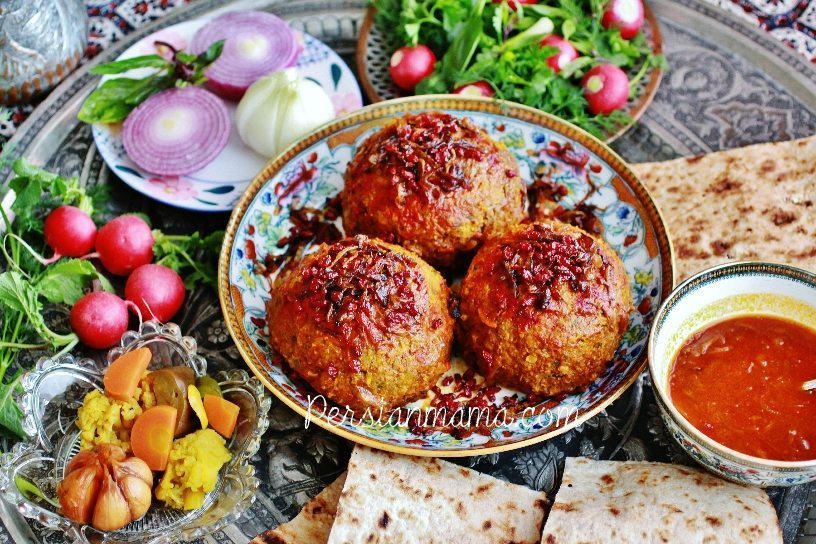 To serve, transfer the Koofteh Tabrizi(s) to the serving platter.  Sprinkle the top with optional ground saffron and ground cinnamon, then add a tablespoon or two of fried onion and barberry mixture.  The tasty broth is served separately in a bowl.  Bite size pieces of Sangak (Persian flat bread) are torn and tossed in the bowl to soak up all the flavorful broth.  The other possible choices for bread are lavash and pita bread.  As most Persian food we serve Sabzi Khordan (assortment of fresh herbs with radishes), Torshi (pickled vegetables), Torshi Sir (pickled whole garlic) and Piaz (onion).  Now that we have everything ready, Let’s Eat! 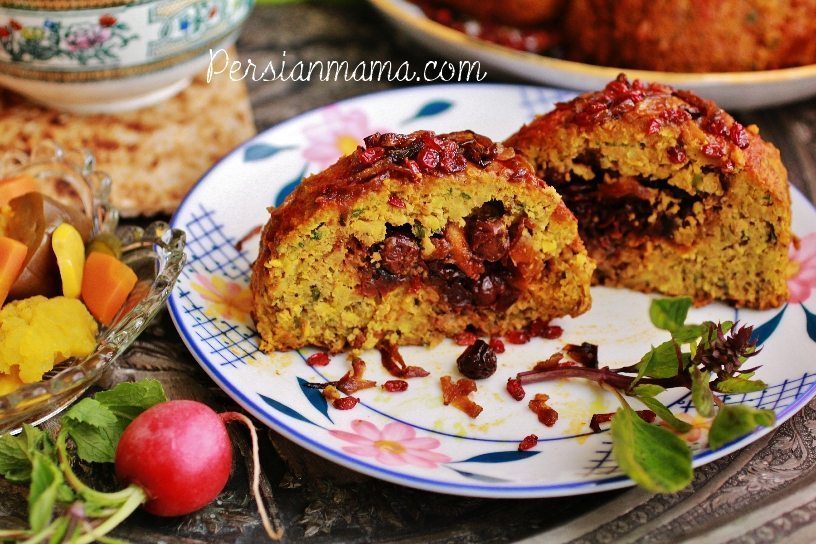 This is what I have been waiting to show you! this is what Koofteh Tabrizi looks like when you cut into one. Only if you could taste these delicious spices, berries and nuts all stuffed inside an equally delicious giant meatball! Just remember, if you use dried Albaloo (sour cherries) like I do, warn everyone about the pits, unless you are able to buy ones already pitted.

p.s. If you try this recipe or any of my other recipes please make a comment on the post and let me know about your experience. 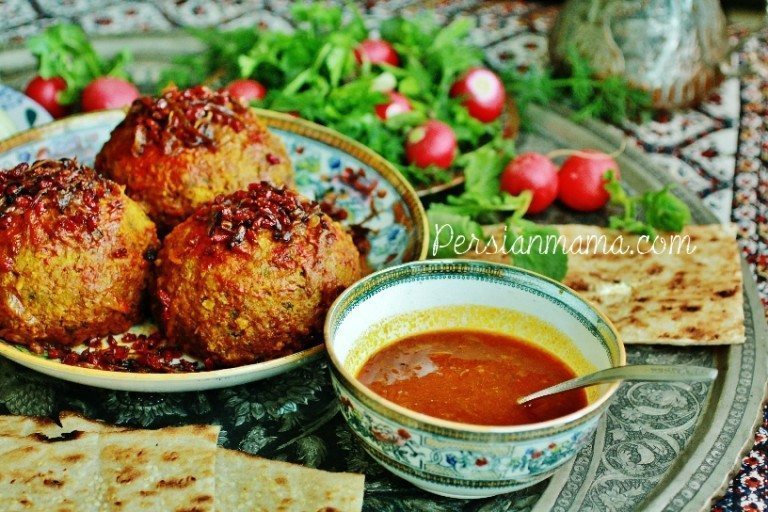 Print
Yields: Six 4-inch Koofteh (giant meatballs)
You will need a meat grinder or a food processor for this recipe
Part of the koofeth ingredients are mixed and refrigerated overnight, and then the rest of the ingredients are mixed in the next day
A 10 ounce bowl is used as a scoop for making the Koofteh(s)
Author: Homa
Recipe type: Koofteh
Cuisine: Persian/Azeri
Ingredients
Instructions
Notes
To reheat the previously frozen koofteh: Defrost the koofteh in the refrigerator a day in advance. The next day prepare the sauce for "Tilit" according to the instructions. With the sauce in slow simmer, add the koofteh(s), cover the pot and simmer for 30-40 minutes, or until heated through completely.
3.4.3174
« SABZI KHORDAN سبزی خوردن
SHIRIN POLO شیرین پلو »