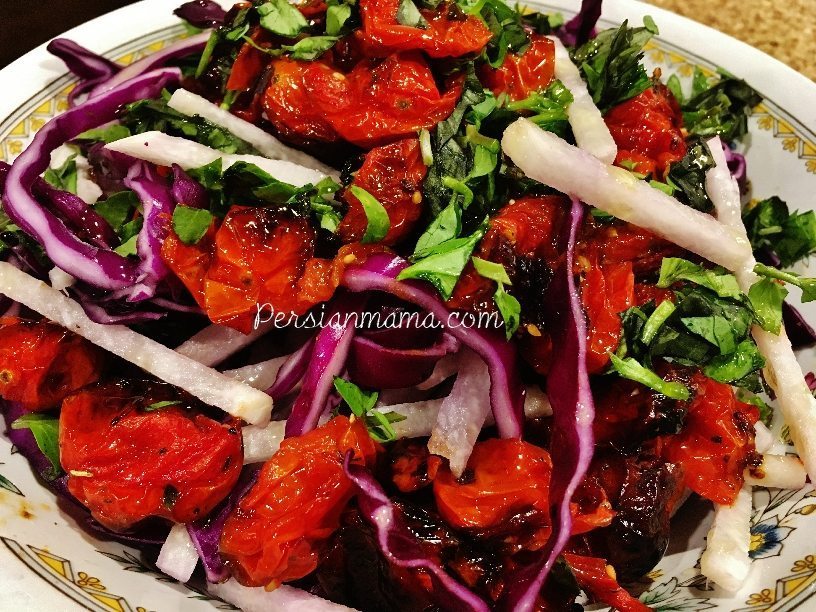 Red Cabbage Jicama Salad, topped with oven blistered tomatoes is quick and simple to prepare. It is a lovely salad by itself with a crusty bread, but it also makes a delicious and healthy side dish for barbecued or broiled meat recipes. The peppery flavor of red cabbage pairs nicely with the crunchy sweetness of jicama.  The grape tomatoes are baked until they burst and caramelize, and then broiled until charred with a tart and yummy flavor. The fresh herbs add just the right flavor to complete this salad with a simple dressing of olive oil and a sprinkle of salt and pepper.
Red Cabbage Jicama Salad is low in calories and loaded with vitamins, especially vitamin C, and antioxidants. Jicama, also called Mexican turnip,  grows in warm climates with a tan colored, thin papery skin. The flesh is white, juicy, crisp, and slightly sweet. To describe the texture, I would say it is somewhat similar to Asian pears, but less sweet. The skin is easily peeled with a paring knife or a vegetable peeler. You will be able to purchase this root vegetable in Mexican or Asian markets; some supermarkets also carry it during spring and summer months. Select firm, medium sized jicama and avoid soft, cracked or bruised skin. 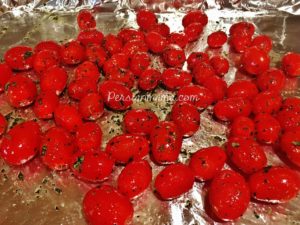 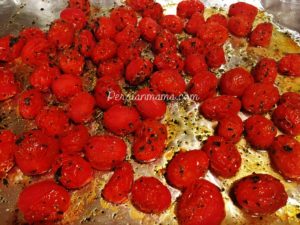 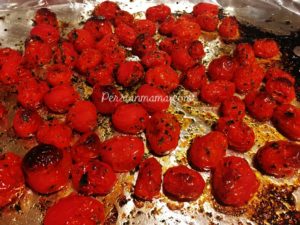 1) Wash and pat dry the grape tomatoes and add them to a large sheet lined with aluminum foil; drizzle with olive oil and sprinkle with crushed dry oregano, kohser salt, and freshly cracked black pepper; use your fingers to toss the tomatoes until all coated with oil and seasoning. 2) Bake in a preheated 400 degree oven for 20 minutes until most of the juice is cooked off and the tomatoes  look caramelized and shriveled; stir a few times for even baking. 3) Switch the oven setting to BROIL, and keep an eye on the tomatoes and continue cooking for another 2 minutes until charred; this give the tomatoes a very nice flavor. 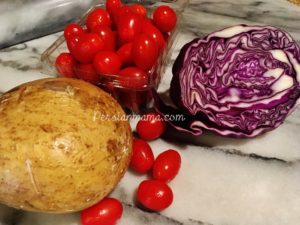 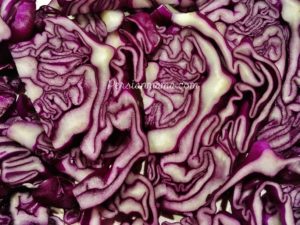 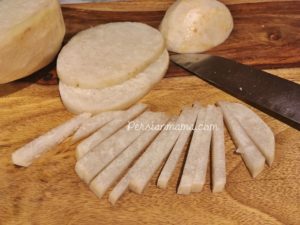 Wash the outer leaves of a red cabbage. Cut the cabbage in half through the two ends and then cut one of the halves in half. You will use one of the quarters for this recipe; keep the rest in the fridge for a later use. Place the cabbage quarter on a sturdy cutting board and shred it by slicing it thin with a sharp knife; add it to the serving bowl. Place the jicama on the cutting board and cut it in half. Store one of the halves unpeeled in the fridge for another salad; use it within a few days. Peel the other half and slice it to about 1/4 inch-thick disks and then cut them into sticks and add them to the bowl. 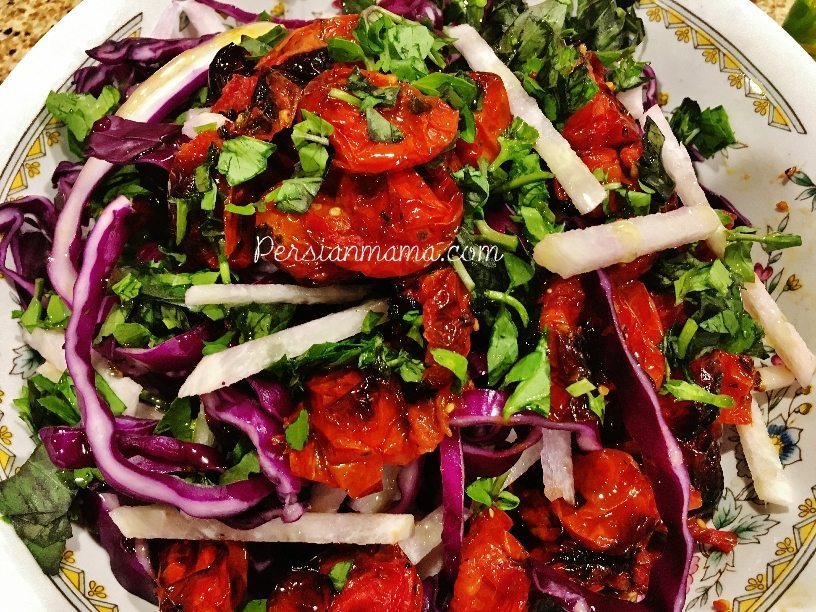 Add the warm tomatoes to the serving bowl. Add the chopped herbs, drizzle olive oil, and sprinkle with kosher salt and freshly cracked black pepper. Toss and serve as a side with your favorite meat dish, or by itself with your favorite toasted bread.