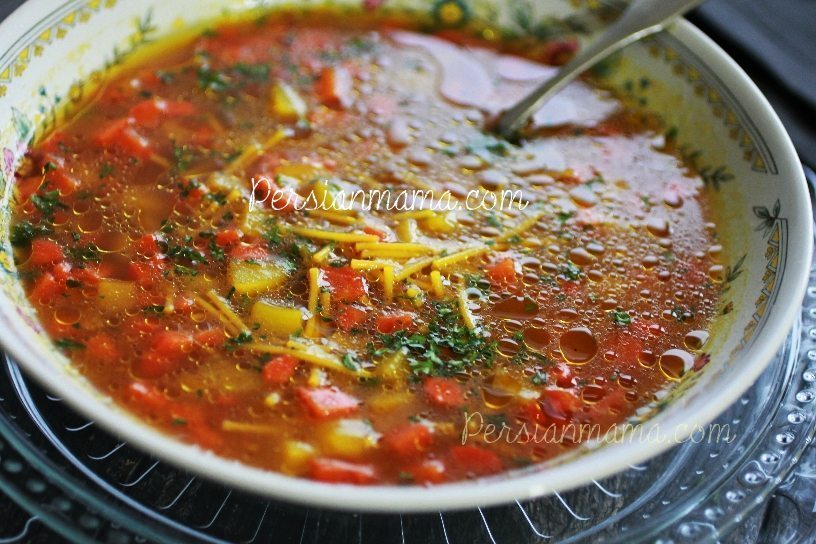 Soup Morgh Zaferani is a Persian chicken soup with saffron, vegetables, and vermicelli noodles. This delicious “red gold” soup is made with rich homemade chicken broth, diced carrots and potatoes. The soup is cooked for a short time, just until the vegetables are tender and flavorful but still hold their vibrant colors. The chopped fresh parsley is added right before serving for optimal flavor and color. 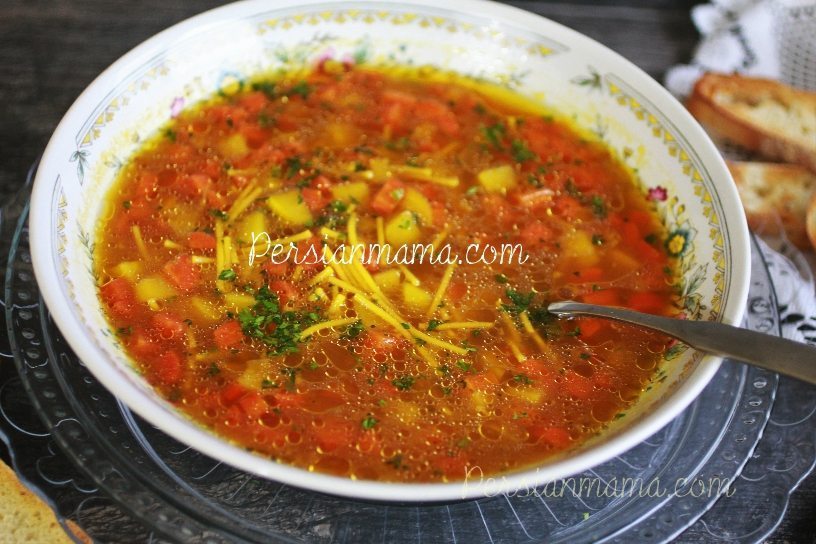 This soup is served in small amounts (usually one ladleful!) as a first course at formal dinner parties, so there is no surprise that it is sometimes called “soup é morgh é majlesi” which means a soup that is served at formal feasts and celebrations. The flavor and ingredients of this easy yet sophisticated clear broth soup have remained pretty consistent over the years. 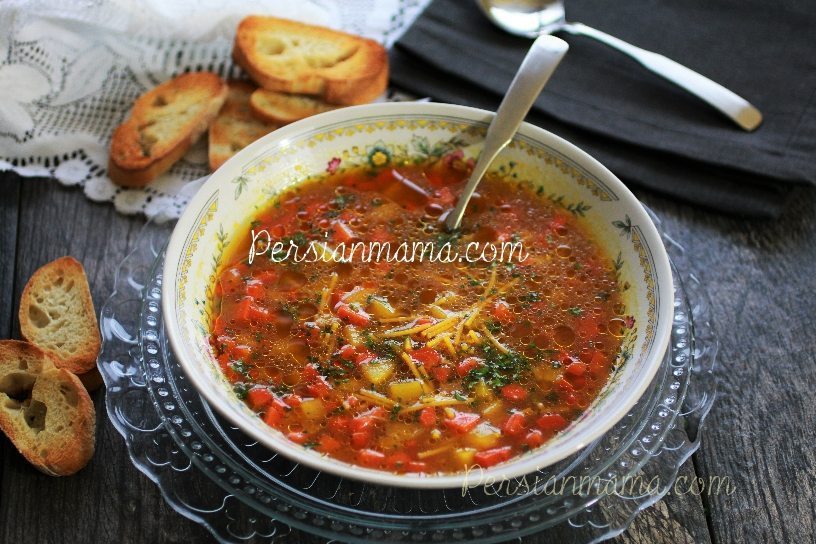 Soup Morgh Zaferani is a glorious saffron soup that has regularly been cooked for special occasions in many Persian kitchens and its popularity dates back to several decades ago.  It still remains as one of the most favorite traditional soups. I have memories of large, several course, dinner parties in Iran where this golden saffron soup was served in shallow china bowls with small red rose (chini gol sorkhi) print. As a child I always wanted a large bowl of this soup for my main meal; somehow its simple ingredients appealed to my young picky palate! 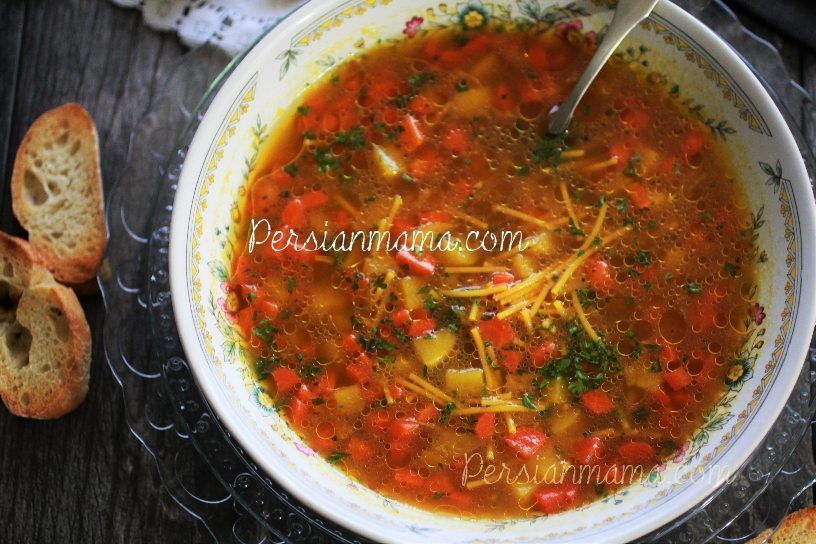 The standard ingredients for this Persian saffron soup mainly consist of a very rich chicken broth, and a small amount of diced carrots and potatoes. This is by no means a noodle soup, there is just enough vermicelli noodles to add a delightful texture without making it too thick. The spars amount of  fine chopped fresh parsley adds a subtle flavor, and a beautiful contrast in color to this golden soup. 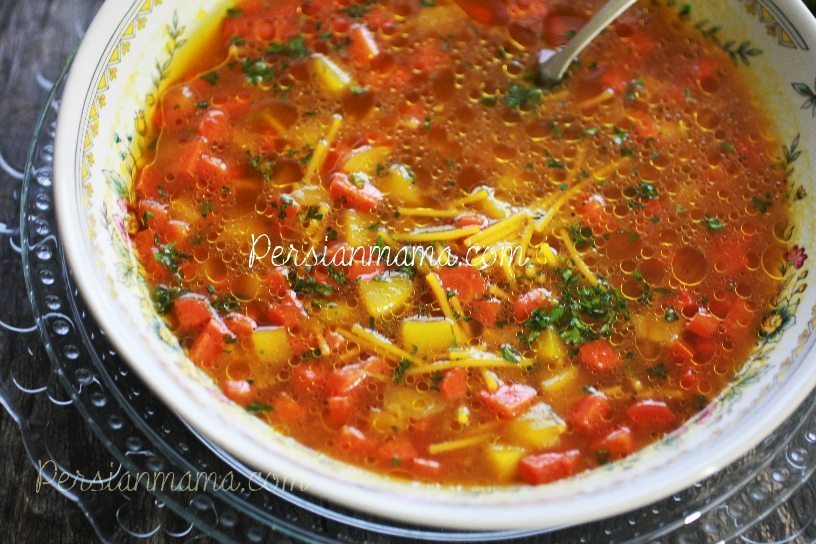 What makes Soup Morgh Zaferani spectacular and far more flavorful than any ordinary chicken soup, is the famous Persian “red gold spice” saffron; however, the quality of the homemade broth plays an equally important role. The broth is made by simmering several bone-in chicken pieces and/or chicken carcass for 2-3 hours in water with onions, salt and pepper. In old times the chicken pieces were cooked with skin for richness and flavor; I prefer to remove the skin for a lighter soup. The more chicken pieces and bones are used, the tastier the broth will be. I strain the broth and use it in the soup, and I save the cooked meat for another use, like salads! 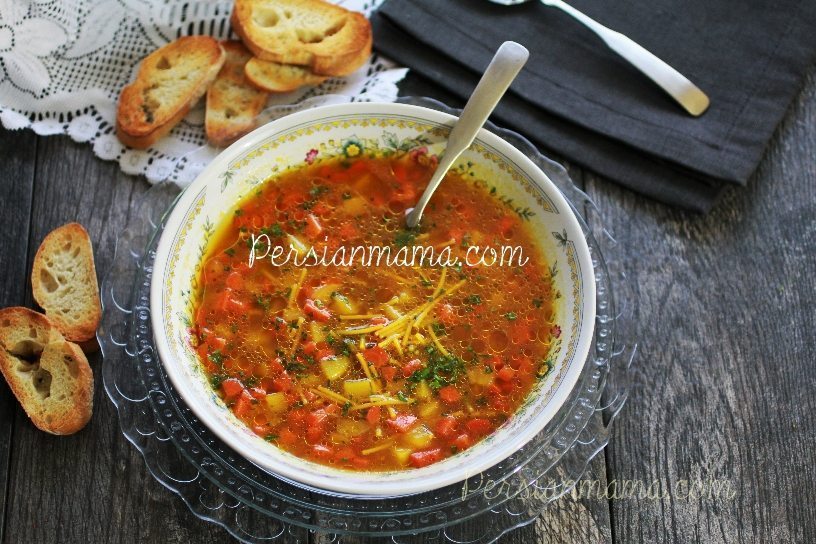 If you have never had this soup before, you’re going to love how the broth mixed in with bits of tender vegetables and soft noodles can be transformed into an out of this world treat with the lovely aroma of saffron, (or ‘zaferan’ as we call it in Farsi). You’re going to be amazed at how something this simple could be so special. If you prefer your food on a slightly tart side, you may squeeze a slice of fresh lemon in your soup and sprinkle the top with some barberries before serving it. 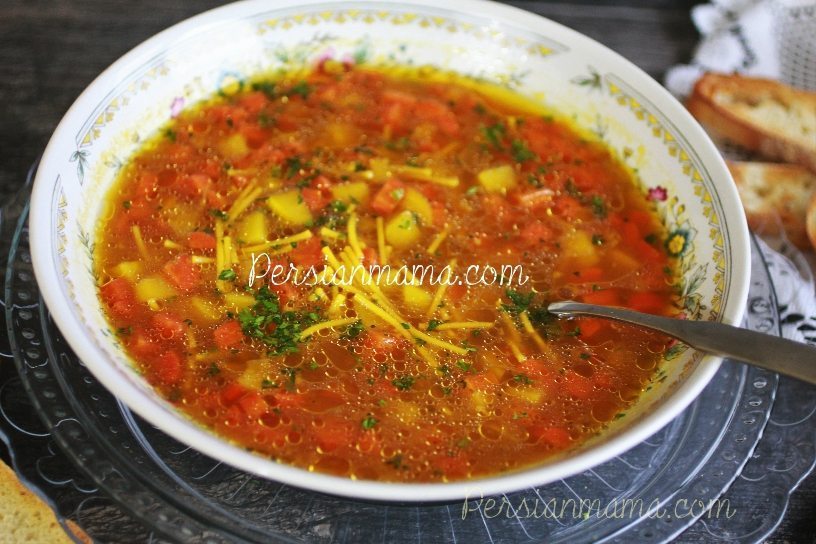 Some other favorite soups that are served as a first course at parties and restaurants are Aash Reshteh and Soup Jo. These Persian favorites are sometimes served as a main course at casual family gatherings. 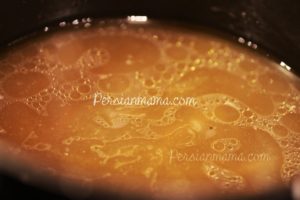 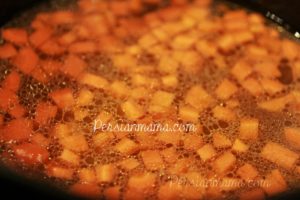 Make a rich broth by adding chicken pieces or chicken carcass (ask the butcher at your supermarket for it), water, onion halves, salt & pepper to a stockpot. Bring the water to a boil and skim off any foam that collects on top. Reduce the heat to just above low, cover the pot, and simmer for 2-3 hours. Strain the broth through a fine mesh and use it in the soup.
Make ahead tip: The broth may be made up to couple of days in advance and stored in the refrigerator. 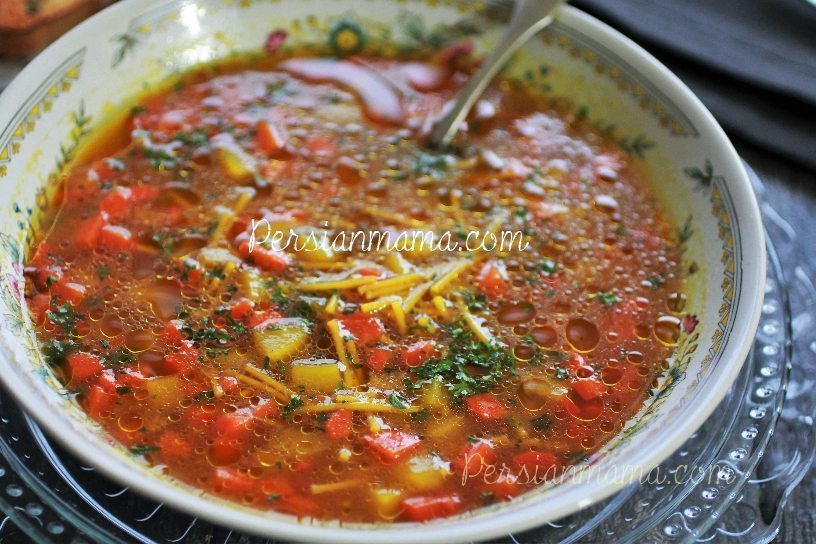 As displayed in this photo, the rich broth causes the dance of glistening circles on top of this aromatic and delicious saffron soup. I have sprinkled finely chopped fresh parsley for garnish this time, but sometimes I also like to serve it with a slice of fresh lemon and a few barberries on the side; either way, I really think it is one of best soups that I’ve ever had. Enjoy this Soupe Morgh Zaferani and let me know what you think!