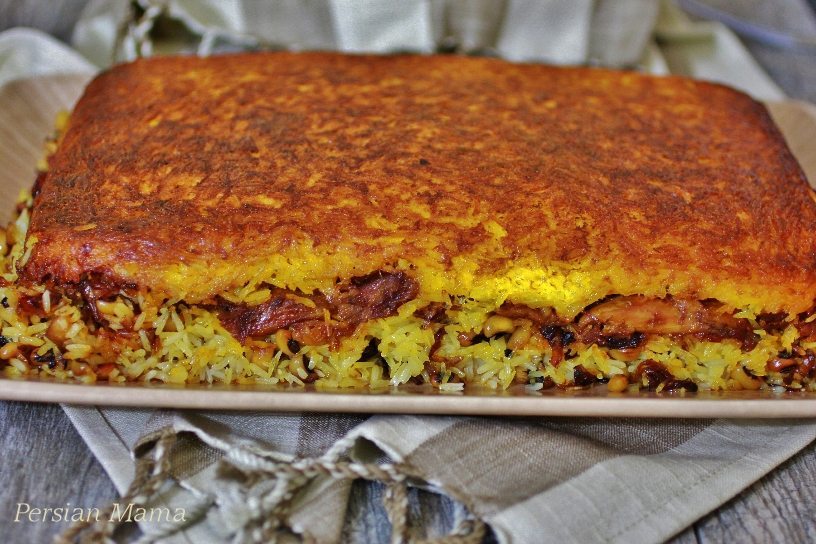 Today I am sharing Tahchin Lubia Cheshm Bolboli with Mahicheh.  The exact translation of Tahchin is “layered in the bottom,” of the pot that is! Tahchin is a favorite Persian rice dish that is baked either in shallow pans in the oven or in shallow nonstick pots on the stovetop. The recipe that I’m sharing is baked in the oven. Unlike the usual rice and khoresh, where each are cooked separately and then served together, the rice and meat or vegetable in Tahchin are layered and baked together. Tahdig which is without any doubt the best part of this amazing Persian dish is the golden crust in the bottom of Tahchin that is made by layering the bottom of the pan with a mixture of egg, yogurt, saffron and par-cooked rice, then layers of rice and meat are added to the top and baked in the oven. 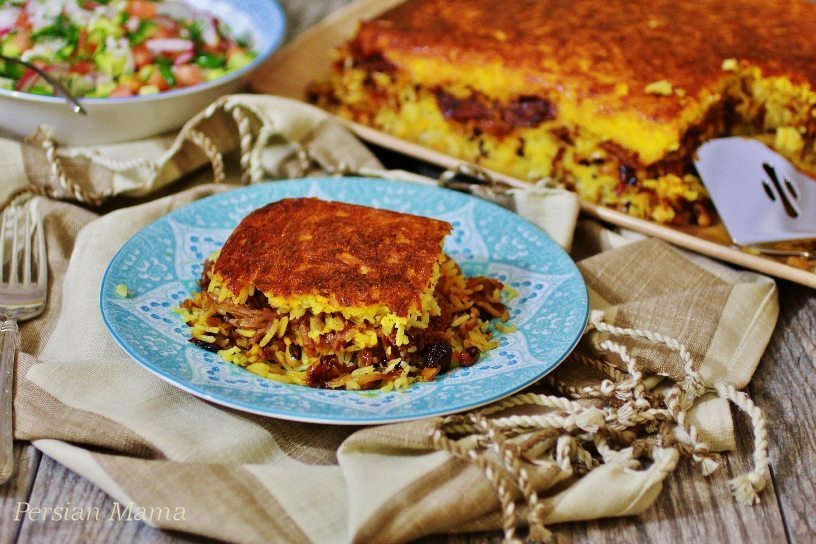 There is a little story about how this particular Tahchin recipe came about. One of my readers asked me about a very traditional Persian Tahchin made with Lubia Cheshm Bolboli (black-eyed peas) and lamb. I was not really familiar with this dish so I called my sister in Iran, who is by the way one of the best cooks I know! After a few back and forth phone calls we put this recipe together with the ingredients on hand. So this may or may not be the traditional Tahchin Lubia Cheshm Bolboli, but I can tell you with certainty, it is one of the best Tahchins I have ever had. I’m also kind of pleased to be able to use the black-eyed peas in such a delicious way. I have used young lamb shanks. each weighing little less than a pound. The secret of delicious, melt-in-your-mouth lamb shank (mahicheh) is cooking it over low heat in very little water for several hours. I cooked these for 4 hours over lower medium low heat (That means the mark between medium low and low) 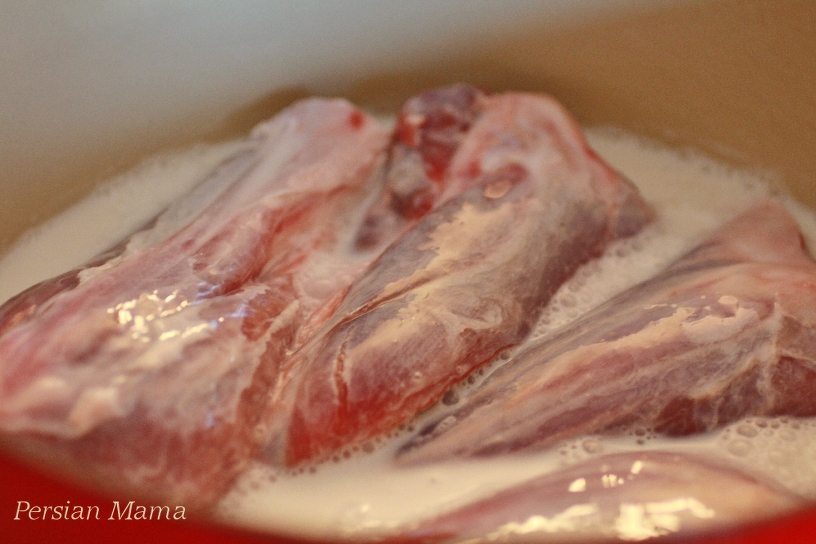 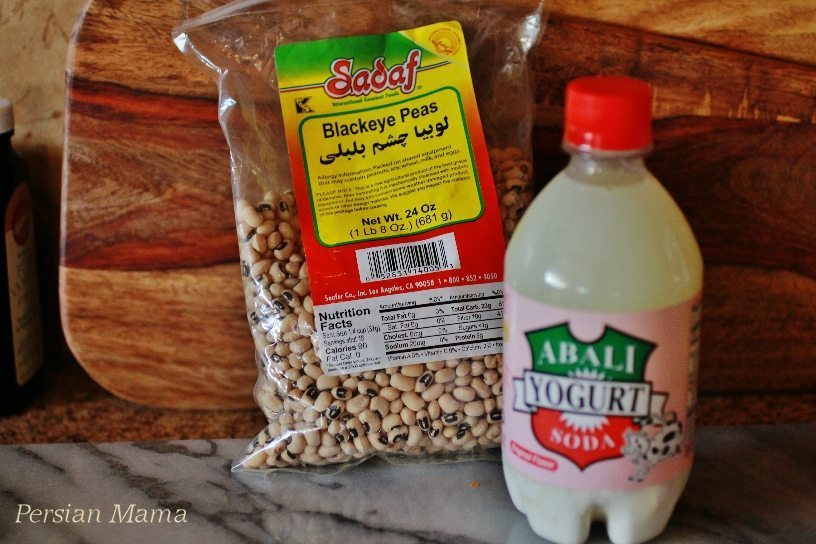 Doogh is a mixture of special sour yogurt and water. It can be purchased at Middle Eastern markets. Buy the plain doogh without any flavoring or carbonation. I had a bottle of doogh soda, which is carbonated and used that instead, after whisking it for a few minutes to get rid of the carbonation. Prepare the black-eyed peas ahead of time and set aside. 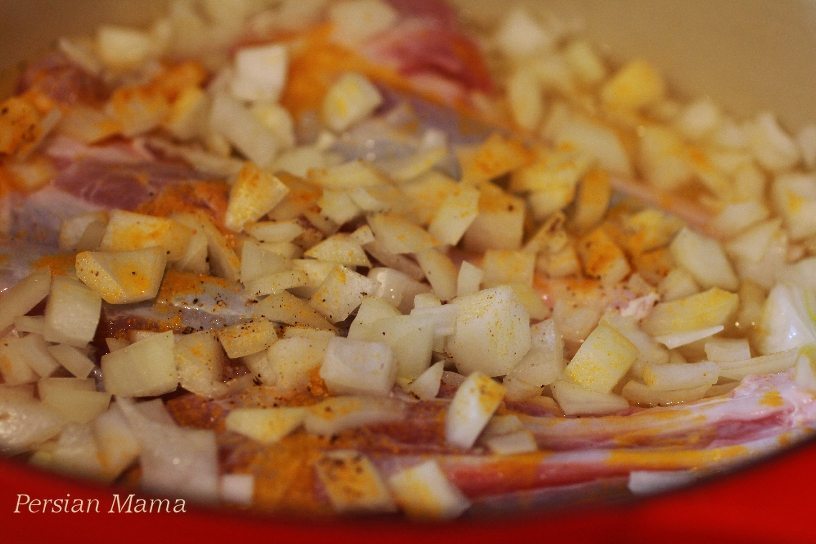 Discard the doogh used in the marinade.  Add the lamb shanks to a Dutch oven. Add diced onions, turmeric, pepper and water. Bring it to a boil, then reduce the heat to the mark between medium low and low, cover the pot and cook for about 4-5 hours, or until the meat falls off the bone. Let it cool a bit, and de-bone the lamb shanks. Divide the broth in half. 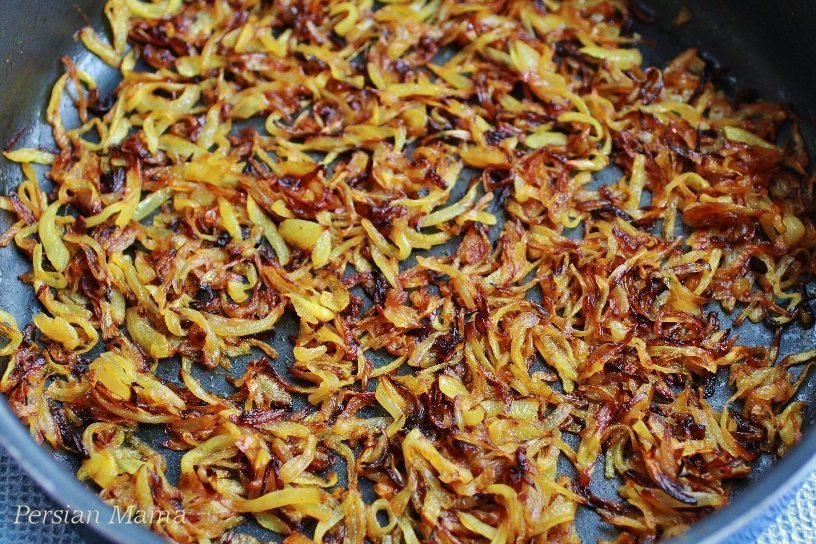 Meanwhile thinly slice the medium onions and fry them to golden brown with some turmeric. Save 1/3 of it in the skillet for the cooked lamb. The rest will be mixed with cooked black-eyed peas.
Start making the rice when the meat is almost ready. Follow the directions for the Persian Steamed Rice up to the point where the rice is par-boiled.  Drain it in the colander and rinse under cold water. Set it aside until you’re ready to layer it with the cooked lamb and peas. 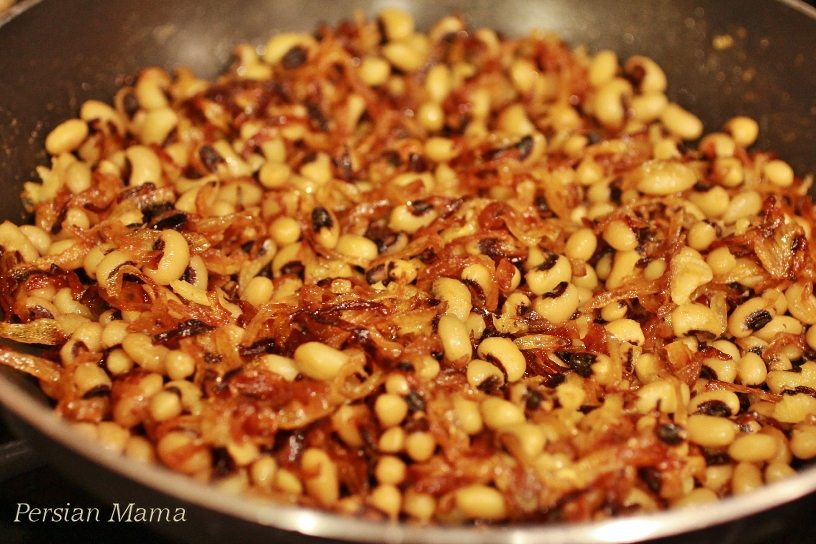 Add half of the broth and a pinch of cayenne pepper to the prepared black-eyed peas and cook until all the liquid is cooked off and the peas are very tender but firm. Add the rest of the fried onions to the cooked peas and toss. Set aside. 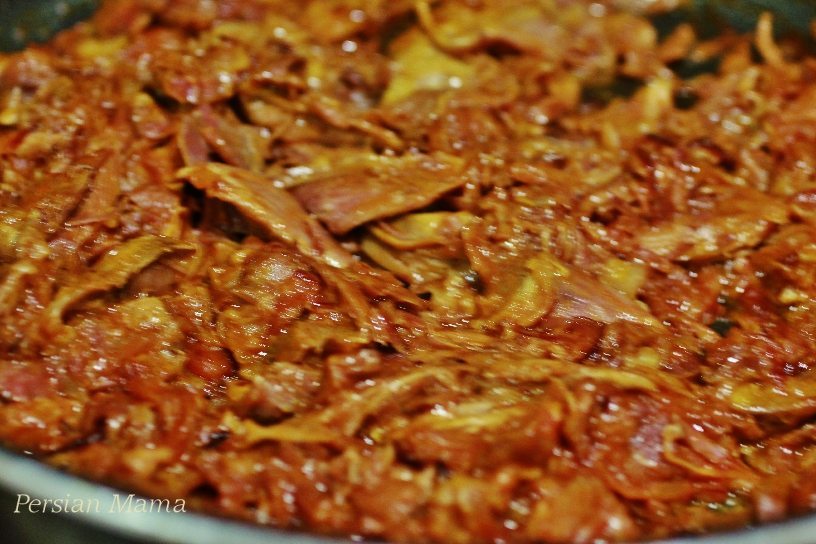 Add some tomato paste to the fried onions in the skillet and saute until fragrant. Add lemon juice, the rest of the broth, saffron and salt. Bring it to a low boil, add the cooked lamb and toss. Turn the heat to low and toss several times until almost all of the broth is cooked off. 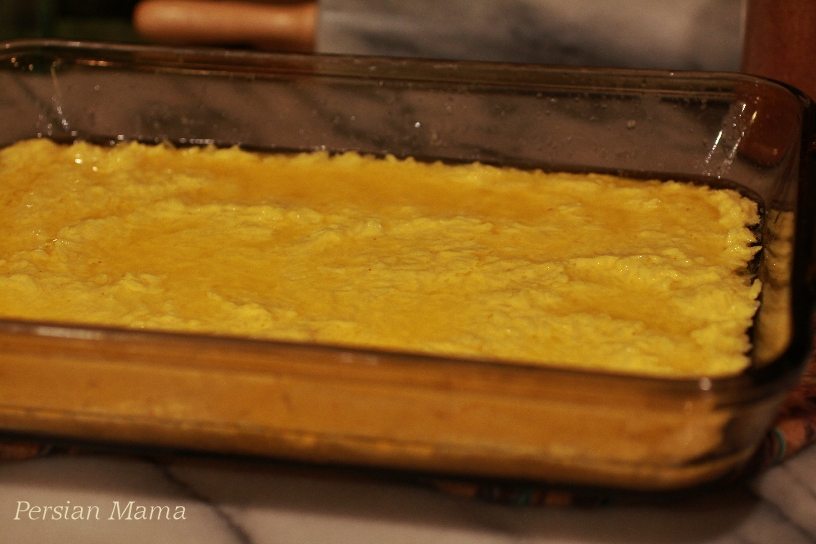 Similar to my Tahchin e Morgh recipe, the bottom layer of this tahchin is a mixture of yogurt, egg, saffron, a bit of vegetable oil, and two cups of the par-cooked rice. 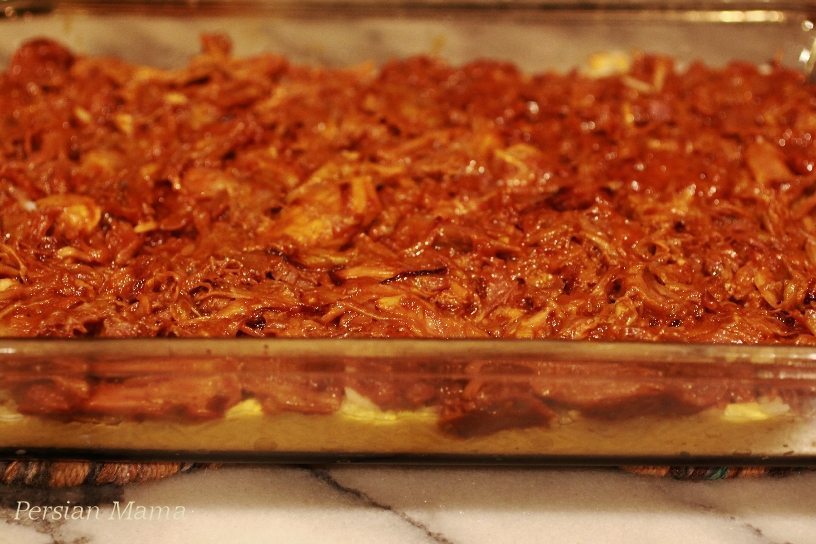 The second layer is some of the par-boiled rice, lightly sprinkled with rice spice. For the third layer the lamb mixture is spread evenly, to cover the rice layer. 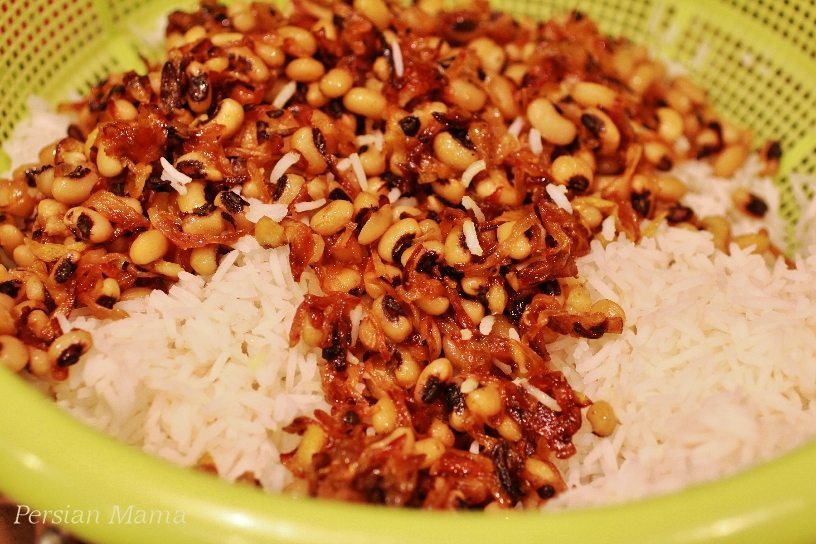 For the fourth layer, toss together the black-eyed pea and onion mixture with the rest of the rice and evenly spread it over the meat.  Sprinkle some rice spice on top. 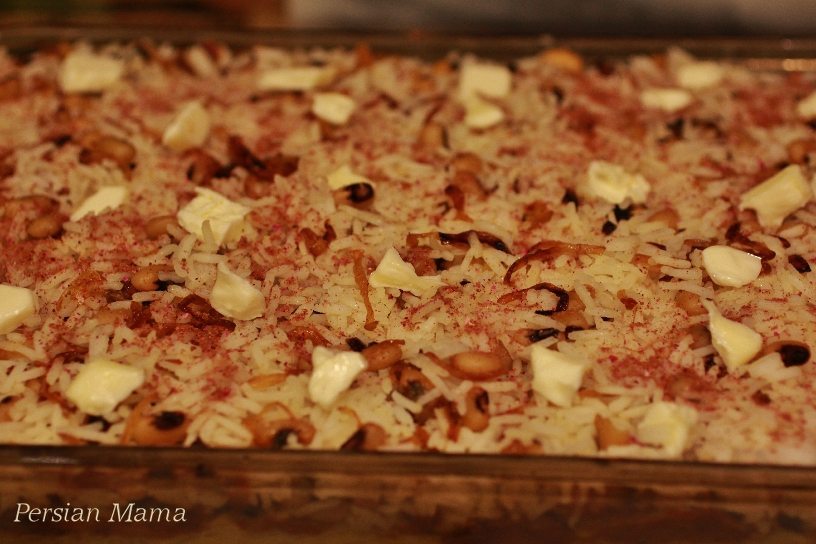 Dot the top with cubed butter and cover tightly with aluminum foil. Poke some holes in the foil with a sharp knife,  and bake until tahdig is golden brown (about 1:15 minutes) 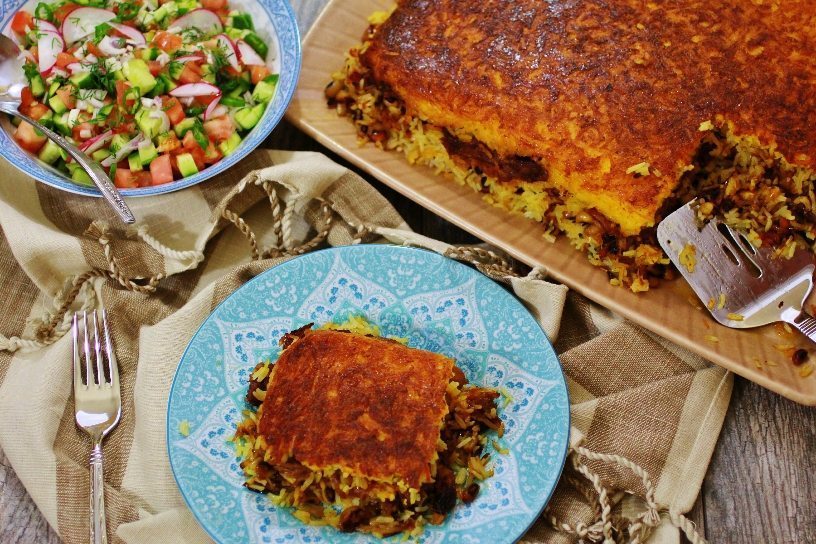 Enjoy this delicious Tahchin Lubia Cheshm Bolboli ba Mahicheh with some Salad Shirazi.  I had some radishes and fresh dill so I added them to my salad!